A delicious port with clear red fruit in the taste, slight aroma's of almond due to the ripening, and a deliciously rich aftertaste.
€14,35
View 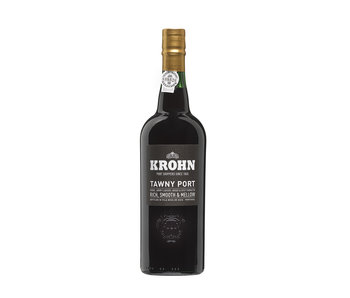 A beautiful herbal port, with flavors of dried figs and plums. Deliciously full of flavor and with a beautiful brownish color due to the maturation in small wooden barrels.
€9,99
View 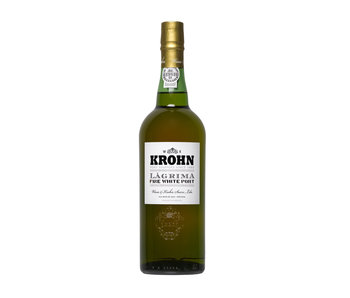 Lágrima, Portuguese for tear, but in this case tears of happiness. Due to the exuberantly rich and sweet character of this Port, some drops (tears) remain on the glass!
€13,25

Since then, the firm has built up an outstanding reputation for its old cask-aged Ports. Krohn is noted for its finely-constituted Vintage Ports sourced from its flagship Douro property, Quinta do Retiro Novo, in the Rio Torto Valley.

In the beginning, Krohn was a very small firm, focused on the export of Port Wine to the Scandinavian and German markets. In the early 1900’s, the company expanded into new markets, including the Netherlands.

In 1880 Theodor Wiese decided to sell his share to Dankert Krohn – the Company was simply too small to be shared by two owners – but he went on working for W&K as a commercial agent in Norway. Due to his excellent work, sales were largely increased and the company entered a new period of economic progress.

On the death of Dankert Krohn in 1906 the business was continued by the widow and daughters of the founder, along with two employees, Gomes Figueiredo and Edmund Arnsby, the former a Portuguese bookkeeper and the latter a British manager.

During this period, the firm extended its commercial activity to new markets, such as France, Belgium and the Netherlands. Gomes Figueiredo retired in 1921 when Edmund Arnsby acquired the share of the Krohn family and took as new partners his brother Frederick – an experienced Port taster who came from the House of Croft – and Edmundo Falcão Carneiro, a Portuguese export manager who had been working for the firm since 1910. Edmund Arnsby died in 1933 and his brother Frederick retired four years later. Edmundo Falcão Carneiro acquired their shares and thus gave origin to an entirely Portuguese owned Port company.